Most operating systems and DNS clients will automatically cache IP Addresses and other DNS results to speed up subsequent requests to the same hostname. Sometimes bad results will be cached and therefore need to be cleared from the cache in order for you to communicate with the host correctly (i.e. when you're trying to go to the domain, it's actually pulling up an old IP address that's cached on your own computer instead of looking for a new one and finding the correct record). All major operating systems allow you to force this process, outlined below are the common steps you will need to follow in order to flush your DNS cache.

​Perform the following tasks, according to your Operating System, to flush DNS for your computer.

Done! You Window DNS cache has just been flushed.

To flush the DNS cache in Linux:

Done! Your Linux DNS cache has just been flushed.

To flush the DNS cache in Mac OSX: 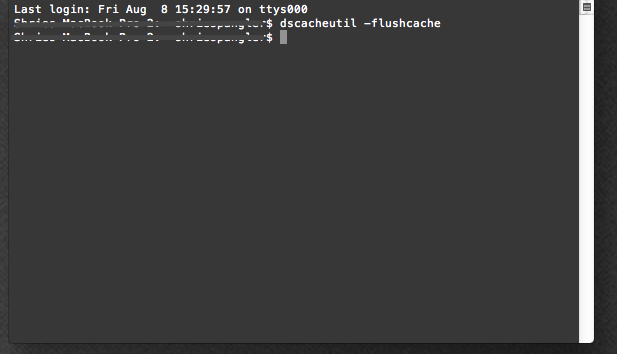 Done! Your OS X DNS cache has been flushed.

To flush the DNS cache in Mac OS X Leopard:

Done! Your OS X Leopard DNS cache has been flushed.

(Please Note: If you are using Yosemite 10.10.4 or 10.10.5, these instructions won't work. Please use the instructions for flushing your DNS on either Mac OSX or Mac OSX Leopard.)


To flush the DNS cache in Mac OS X Leopard you need to use the Terminal to reset cache. You can find the Terminal app by searching for it from Spotlight. To completely clear all DNS caches, target both MDNS (Multicast DNS) and UDNS (Unicast DNS) with two different commands.

Done! Your OS X Yosemite DNS cache has been flushed.

The Basics You can have multiple domain names share the space on your cPanel account. It works...

What is a nameserver? A nameserver (sometimes called a DNS server) is what translates a domain...

You've registered 'example.com' and signed up with Greenix360. But, you also have 'example.net'...

What IS a sudomain?  You have a domain name 'example.com'. A subdomain would look like...